Relocating to Phoenix, AZ has become a top choice for moving homebuyers in the third quarter of 2021, according to a recent report from Redfin. Quarter three of this year has seen more than 30% of Redfin’s users move to a different metropolitan area, though that number is down from just over 31% in Q2. This is the second straight quarter of declines after the previous four quarters saw increases. Despite the sliding numbers, interest in changing one’s address during Q3 remained higher than Q3 2020— 29.2%— and before the pandemic— about 26%.

The Redfin report analyzed roughly 3.3 million users who searched for homes across 125 cities in the third quarter, omitting searches that didn’t seem like they would lead to an actual relocation or the purchase of a home. To qualify for the report’s data, Redfin users had to have viewed at least ten homes in a particular metropolitan area, and homes in that area were required to have made up 80% or more of the user’s searches.

While the housing market naturally cools down at this time of year, homebuyer bidding wars, home price growth and home sales growth have additionally contributed to the tumbling numbers.

These factors notwithstanding, Redfin Deputy Chief Economist, Taylor Marr, believes these numbers will slide to pre-Covid 19 levels any time soon. “We expect Americans to continue relocating at a higher rate than they did before the coronavirus pandemic,” Marr said. “As employers fight to retain talent during the ongoing labor shortage, they’ll face mounting pressure to introduce permanent flexible-work policies that will give more workers the option to move where they want. We’re also starting to see a resurgence in demand for vacation homes, which could help sustain the relatively high rate of house hunters searching outside their home metro.” 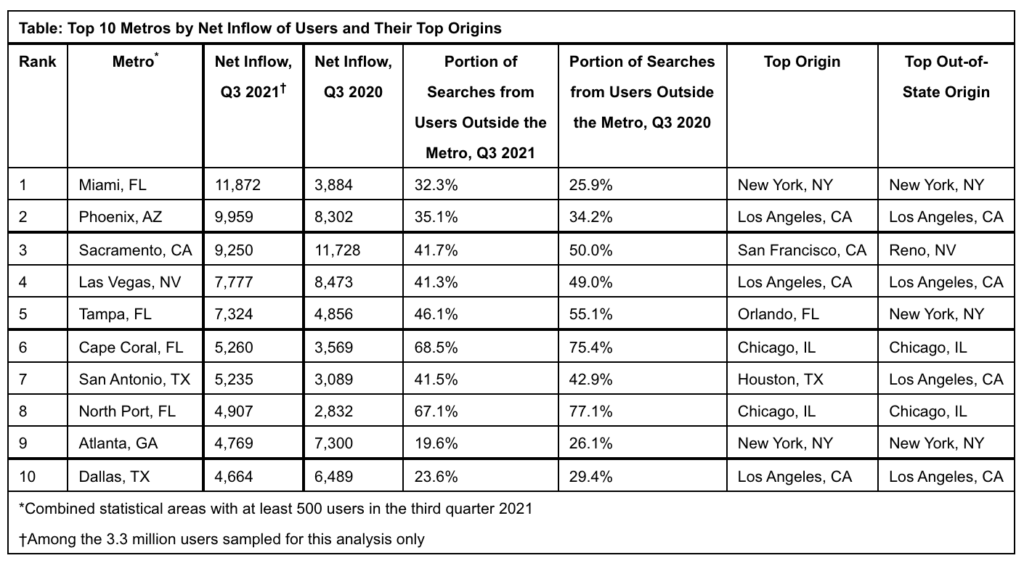 Flanking Phoenix’s no. 2 spot for relocating homebuyers in Q3 2021 is Miami (no. 1) and Sacramento (no. 3). Las Vegas and Tampa round out the top five. These cities saw the largest net inflows of residents. A net inflow is a measure of how many Redfin users searched with intent to move into a metro area vs. those who actually left.

Warm climates and affordability often make for popular migration locations, explaining why residents are choosing to leave places like New York City, San Francisco, or Los Angeles. These areas have become even more in-demand during the pandemic with remote workers prioritizing housing costs, space, and warmer weather over commutes.